The current pandemic has placed immense pressure on journalists and media outlets to present the facts and findings in an accurate and timely manner. This increased scrutiny has led some to question the ability of news journalists to convey complex issues in a clear and decisive way to the general public.

A topic which came up frequently in a news conference I attended remotely in August this year, panelled by prominent Australian journalists including the founder of the online platform The Conversation , Andrew Jaspan, and the Australian Broadcast Corporation’s (ABC) Dina Rosendorff. The latter went as far as to say that many journalists lack the basic understanding of statistics needed to interpret complex topics like the spread of Covid-19 and climate change.

Given that journalists play a vital role in informing the public, I found this particularly interesting as the overwhelming scientific consensus on human induced climate change is not reflected in public perception or political action. Although the gap between expert and public understanding is narrowing, common knowledge of key facts like the link between fossil fuel emissions and climate change is still lagging behind.

According to a cognitive science study published in 2012, only 12% of Americans understand that greenhouse gasses trapping heat in the atmosphere is the main cause of global warming, although 69% did accept that global warming is taking place now (a 2019 poll suggests that it’s now 75%).

This highlights a disconnect between accepting the reality of the issue and an understanding of its’ underlying causes. A disparity which may be explained by a lack of clear and factual communication (of current climate science) between experts and the general public, a task which is inevitably passed on to the journalists and news providers of the World.

In an interview with Nigel Tapper, a professor at Monash University and lead author at the IPCC (Intergovernmental Panel on Climate Change), he suggested that journalists are in a ‘really good position’ to transform difficult concepts into easy to understand news content for the public.

The ‘good position’ Prof. Tapper was speaking of becomes more obvious when you ask people where they get their news on climate change. A Reuters Institute report published this year found that over half of people surveyed gather information on climate change through traditional news sources. The survey which had over 80,000 respondents from 40 countries found that 35% of people pay the most attention to climate change news on television, followed by online news sites 15%, and then printed newspapers and radio together accounting for 10% of responses. 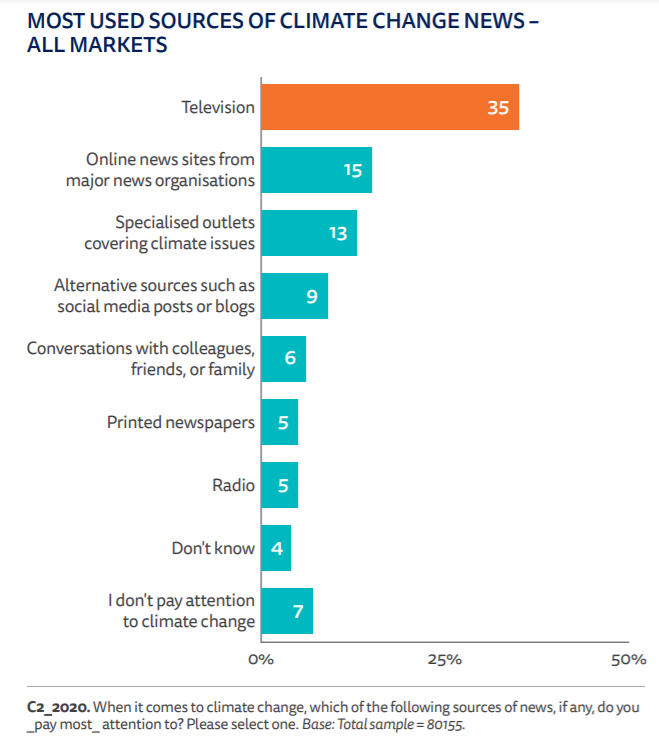 Perhaps this isn’t surprising to members of the academic community who have been suggesting for some time that a lack of factual reporting in news media has swayed public opinion on climate change. Speaking to Berkeley News, David Romps a professor of earth and planetary science at the University of California, Berkeley, said that after high school the primary source of information related to science is through news media. If this news coverage doesn’t cover appropriate content, then you will be left ‘confused’.

What are the causes of this information gap?

It seems fitting to start with perhaps the most obvious reason for shallow reporting on climate change. According to an InfluenceMap report the five largest public fossil fuel companies spend around $200 million a year lobbying to limit or suspend action on climate change which, may be a leading cause for the ‘strong presence’ of climate scepticism in conservative politics, particularly in the USA. A stance which certainly trickles down into conservative news media outlets like Fox News and the Daily Mail, according to a review published in the journal Environmental Research Letters. 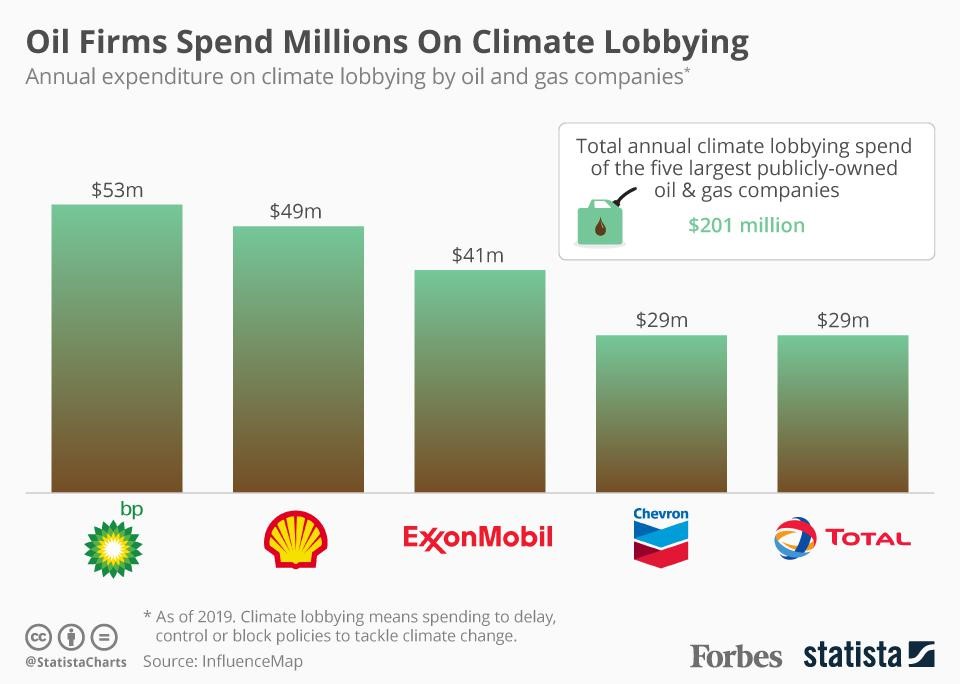 It is no secret that fossil fuel companies spend big on climate lobbying. Source: Forbes (2019) originally posted by InfluenceMap (2019)

In the context of this well-funded campaign maybe it’s unsurprising to hear that 28 of the largest news providers in the USA didn’t even bother reporting on the IPCC special report on global warming in October 2018. Removing corporate bias from climate change reporting will require major changes to media regulations and corporate lobbying tactics, and so for now I’d like to put this aside and examine the shortfalls in more fact-based news reporting.

First, I’d like to go back to my recent interview with professor Tapper. When questioned on the presence of climate change facts and implications in the public domain he said they are ‘critical’.

“[Covid-19] is another really good example of how science can inform public policy but [also] how often it’s ignored by populist politicians.”

In relation to this, a new study published in 2019 claims to have identified an ‘untapped resource’ for getting basic facts and information on climate change across to the public. Surprisingly, the study found that even articles in a well-respected and popular news provider, The New York Times, lacked basic facts including the scientific consensus and the mechanism of warming in the vast majority of their articles relating to climate change.

The study analysed over 1800 articles containing ‘climate change’, ‘global warming’ or ‘greenhouse effect’ in their titles, specifically in search for five basic facts on climate science. The presence of each of these facts are listed in the figure below. 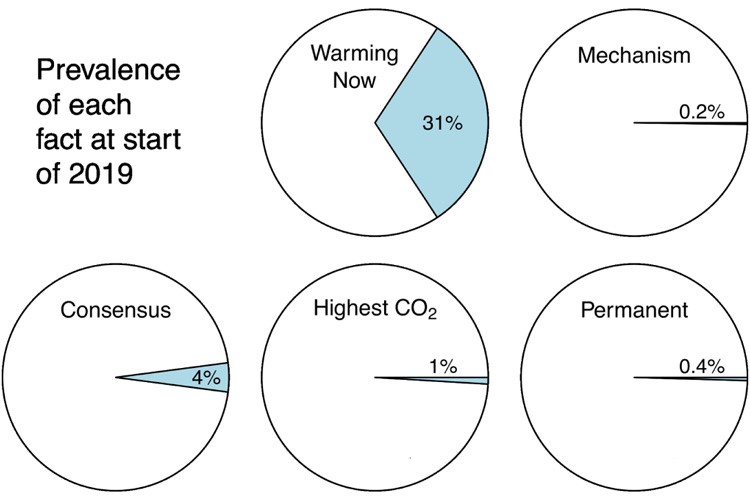 From the original study: “The five facts for which we searched. Stated succinctly, they are: 1. "Global warming is happening now", 2. "The mechanism of global warming", 3. "The scientific consensus", 4. "Highest CO2 concentrations in hundreds of thousands or millions of years", and 5. "The permanence of global warming".” Source: Romps & Retzinger (2019)

To take this a step further, a slightly dated study from 1995 found that only 10% of text in newspaper articles regarding science was allocated to explaining scientific terms and concepts. Perhaps this highlights the difficult and demanding task of including complex and wordy scientific terms in news stories. Nevertheless, when dealing with an inherently complicated but vital issue like climate change it is best that the reader knows the basic facts.

On the other hand in commercial science journalism the impact and newsworthiness of a story often trumps important but less eye-catching background information. Another study analysing the use of language in articles published by the New Scientist suggested that writing which involves climate change is often constructed on what “engages target audiences the most and what alienates them the least”. They proposed that strong statements and overly negative findings may be seconded for more uplifting or progressive narratives to keep readers engaged.

So, if reporting on climate change is proving to be such a difficult task, what could be done to bridge this gap between the experts and the consumers? One suggestion is for news outlets to provide courses in statistics to journalists to make findings in science more comprehensible. Dina Rosendorff of the ABC agrees with this, and also hopes that both her employer and other news outlets will soon have dedicated climate change reporters with a broader scientific understanding. She said that this lack of specialist reporters is an issue the ABC has been grappling with for some time now. However, in an industry which is struggling for public support and advertising revenue, this may seem a bit of a luxury.

Journalists have a huge task and carry a heavy responsibility in informing the public and ultimately policy. A task which is not always made easier by scientists who, as Prof. Tapper admitted, could communicate in much more comprehensible language. But given the immense and challenging nature of the issue and the severity of its implications, I believe we as consumers, journalists as conveyors of information and scientist as our guides, could all be doing better. 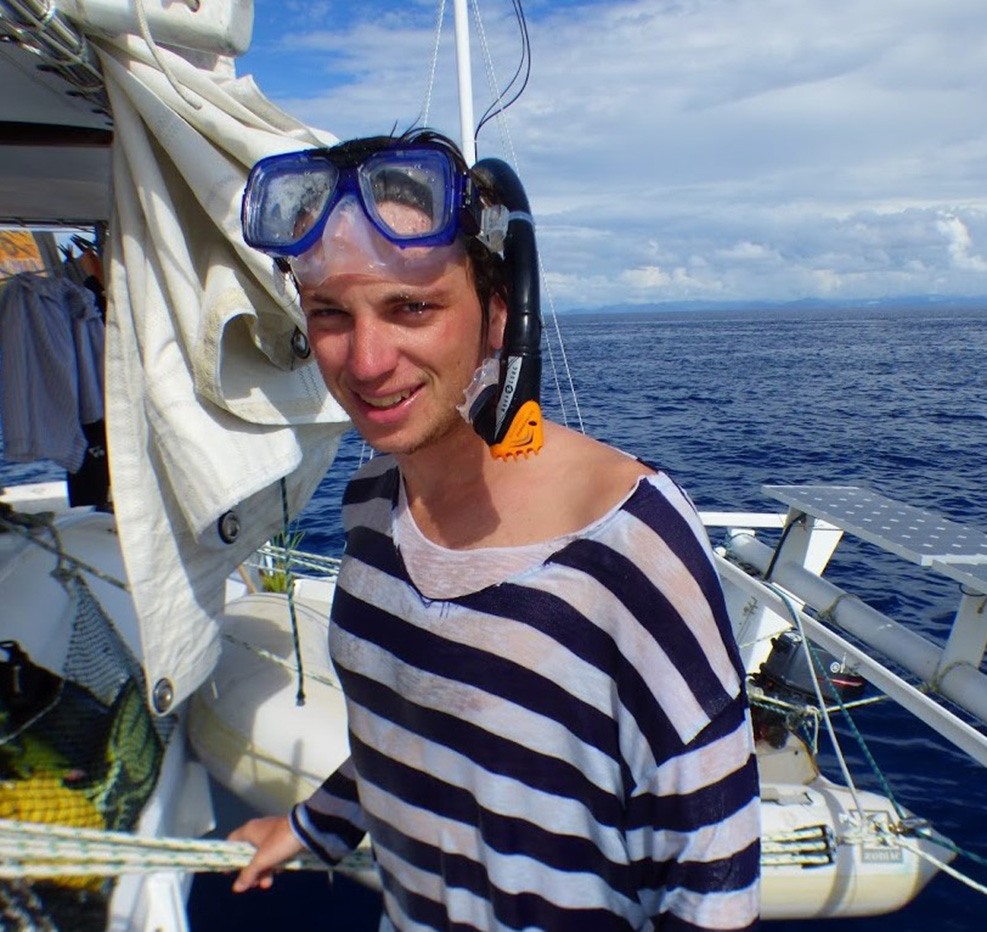 I’m a 24-year-old Australian environmentalist studying toward a BSc in Ecology and Conservation Biology at Monash University. I grew up living at an Eco lodge in the rural mountains of Bali, and from a young age I developed a love for wildlife and an uncontrollable urge to explore wild environments. My passion for the natural world and belief in our ability as humans to do good, leaves me optimistic for the future of conservation, and for our own sustainability in a rapidly changing world.