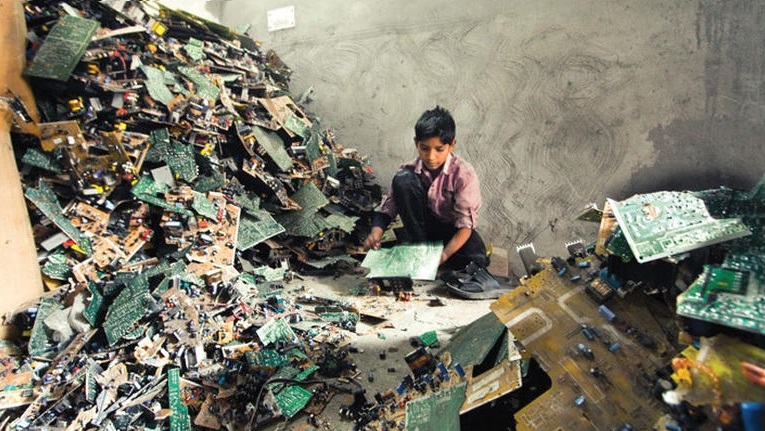 Electronic Waste: A Growing Threat with an Unjust Distribution

When was the last time you bought a new phone, laptop, television, or fridge? What did you do with the old device? If you did not intend to re-use it, your old device became electronic waste, also known as e-waste. E-waste may represent only 2% of solid waste streams, but it is the fastest growing waste stream and can represent 70% of the hazardous waste that ends up in landfills. In 2018, 50 million tonnes of e-waste were generated, which had an equivalent weight of approximately 5,000 Eiffel Towers. The generation of e-waste is expected to be 240% higher in 2050, with 120 million tonnes.

The biggest challenge of e-waste is its diverse composition, which differs in products across different categories. It contains more than 1,000 different substances, and this makes e-waste recycling a complex and expensive process. Iron and steel constitute about 50% of the e-waste followed by plastics (21%), non-ferrous metals (13%) and other constituents. Non-ferrous metals include precious metals such as gold, silver, copper, nickel, platinum, and palladium. However, e-waste also contains hazardous substances, such as heavy metals like lead, chromium, mercury, and cadmium, and persistent organic pollutants like flame retardants. In total, only 20% of e-waste is recycled through appropriate channels. The vast majority is illegally traded to low- and middle-income countries, where there is a demand for raw materials, and disposal costs for toxic waste are cheaper due to poorer environmental protection measures. This activity is a clear example of environmental injustice, as introduced in a previous post. 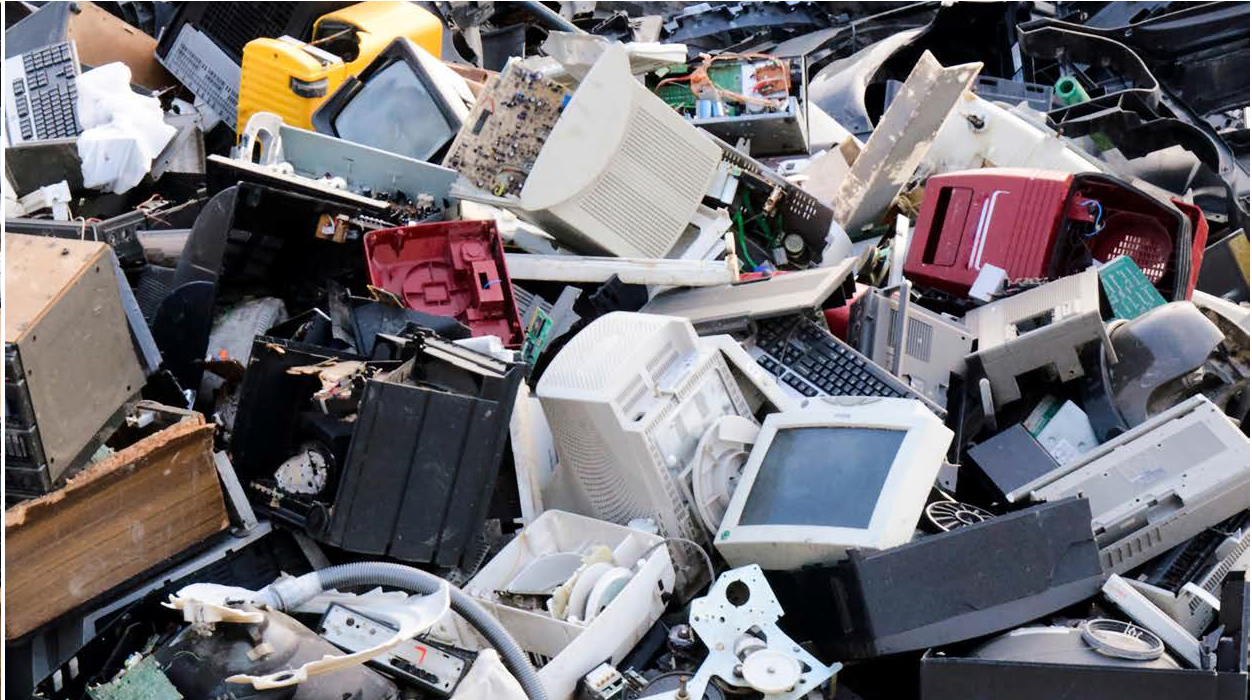 E-waste comprises a wide variety of products, each one with different economic values, as well as potential environmental and health impacts, if recycled inappropriately. Source: Baldé et al., 2017.

To stop this illegal trade, the international treaty of the Basel Convention on the Control of Transboundary Movements of Hazardous Wastes and Their Disposal was adopted in 1989 and is now being ratified by 187 countries. This treaty requires all countries to obtain prior informed consent from a receiving country before exporting hazardous waste. Yet large amounts of e-waste continue to be shipped illegally through a complex web of transshipment ports to avoid detection by authorities. Loopholes in current e-waste regulations also allow for the export of e-waste to developing countries under the guise of “donation” and “recycling” purposes. China was the largest importer of e-waste in the world until it decided to ban waste imports in 2018. Now, the pressure is increasing in Southeast Asian countries, especially Thailand, which is also preparing to ban e-waste imports.

Flow of e-waste exports in 2010. China banned the import of e-waste in 2018, resulting in an increase of e-waste imports in Southeast Asian countries. Source: Lundgren, 2012.

In the receiver countries, e-waste is usually disposed of inappropriately in open dumpsites. There, many adults and children live off the informal waste sector, which means that they extract and sell recyclable and reusable materials from mixed waste, without being registered as official workers. Most of the informal recyclers do not have protective equipment and get exposed to pollutants when breaking the e-waste components apart with their bare hands and burning insulated cables as a fast and cheap method to recover copper. This last activity causes huge air pollution and health problems due to emissions of black carbon, heavy metals and toxic chemicals. Soil and water bodies in dumpsites are also terribly polluted due to the leaching of pollutants from waste, especially when it rains. Lead is the pollutant that poses the greatest threat at the dumpsite. It is detected at high levels in soil, food and worker’s blood. Lead exposure is cumulative and can affect the nervous system, the blood system, the kidneys and reproduction. Even low exposures can damage brain development in fetuses and children, who may develop intellectual impairment.

Informal recycler burning insulated cables to recover copper in Agbogbloshie (Accra, Ghana), a place that was classified in 2013 by Pure Earth and Green Cross International as one of the top ten most polluted sites worldwide. Picture from Muntaka Chasant.

Some local governments attempt to enclose dumpsites as a way to solve the public health problems derived from them, but they do not provide alternative jobs or housing for the informal recyclers. Municipalities should adopt progressive measures that allow for recycling while protecting the health of the community. Meanwhile, non-profit organizations work to reduce the informal recycler’s exposure to hazardous substances through awareness, distribution of protection material, creation of safer and better ways to extract metals and creation of alternative jobs. E-waste exporting countries are responsible for attacking the roots of the problem by improving recycling and demanding electronic products that have longer lifespans and repairable designs. Some companies are already offering smartphones with these characteristics. Reducing waste is more desirable than recycling it, since we save more energy and materials and avoid environmental and human health risks. Shortly said, “the best kind of waste is the one that is never made”! 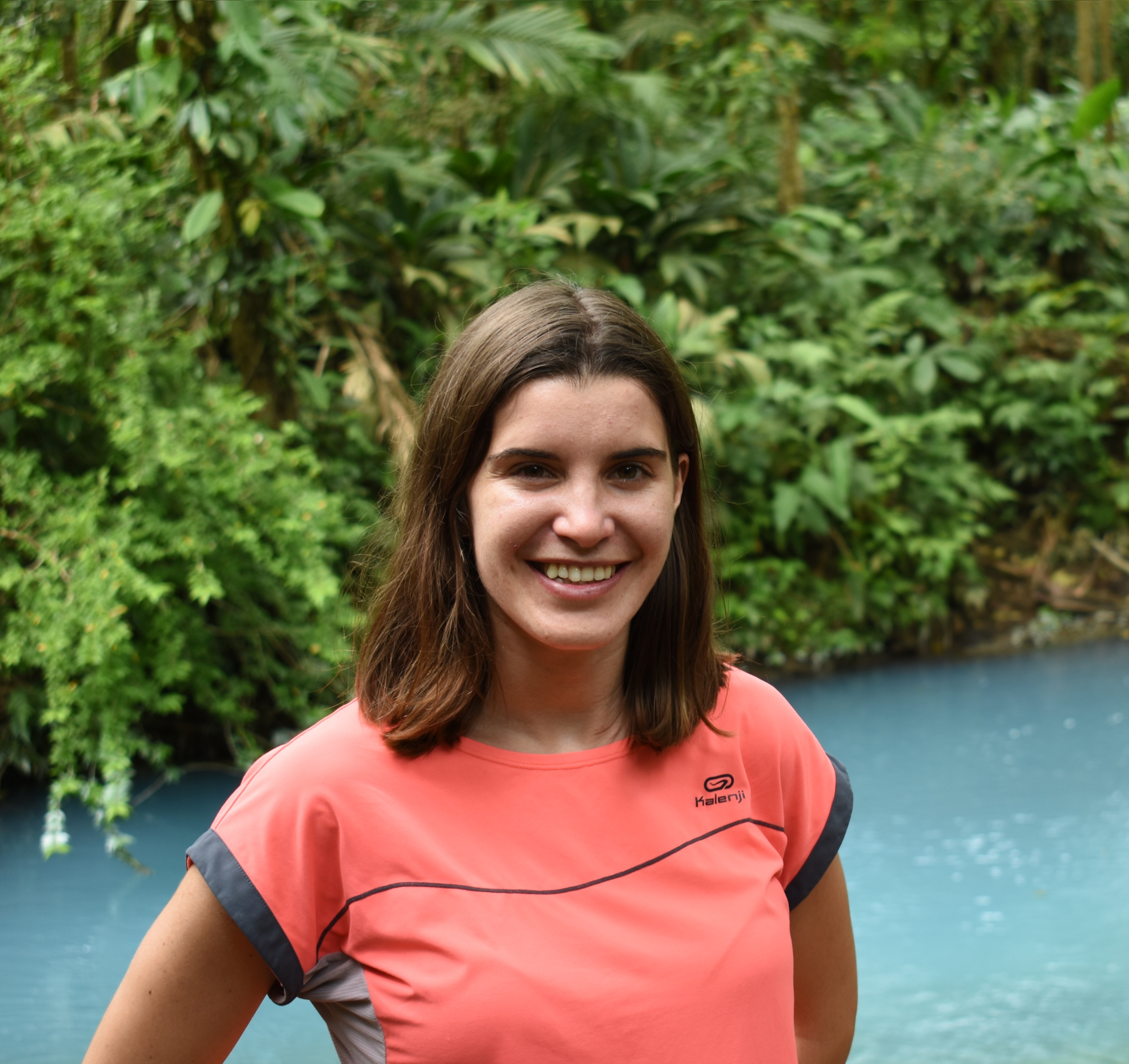 I am 26 years old and come from la La Vall de Bianya, a rural area in the North of Catalonia, Spain. I received my BSc in Biotechnology from the Autonomous University of Barcelona in 2015, and I completed an MSc in Environmental Sciences at the University of Copenhagen in 2018. I have studied the environmental toxicity and risk of pesticides found in Bolivian and Costa Rican rivers. My dream is to tackle environmental injustices, especially related to persistent pollutants and (hazardous) waste.